The adoption of the SDGs created a niche of joint interest between financial and charitable investors. The niche reflects the impact of SDGs on public awareness of development issues, and the willingness of people to see their savings and investments working not only for financial gain but also for the good of the world.

The majority of commercial investment managers today already allocate part of their portfolio to high risk investments with expected high impact in terms of Environmental, Social and Governance indicators, jointly referred to as ESG investments. Financing for impact investing, being part of the wider ESG landscape, is rising at a rate of over 15% per year, and in the assessment of the Global Impact Investing Network (GIIN) the main constraint is not the lack of financing, but the lack of sufficient number of projects and the need for effective management of projects receiving impact investments.

In the current financial markets the rates of return net of risk are at historical lows. The SDG focus of projects generated by the CFC meets the trend to make this low interest rate environment an opportunity for global sustainable development. The CIIF builds on the experience that projects identified by the CFC are financially sound at the capital preservation level after providing for operational, financial and other risks. CIIF projects will take advantage of this and deliver material outcomes in terms of sustainable development, while achieving capital preservation.

The CFC, due to its specific structure and experience can reach projects which are not otherwise accessible to the impact investment community. CIIF will make such commodity projects accessible to:

The Commodity Impact Investment Facility is an impact investment fund, established and advised by the Common Fund for Commodities (“CFC”) as a public-private partnership to invest in commodity value chains in developing countries for the purpose of advancing the sustainable development goals while achieving capital preservation or positive rates of return on its portfolio.

The CIIF basic rationale is to combine the CFC experience and expertise with funds from impact investors to address the fundamental issues affecting the development of successful SMEs in global commodity value chains (GVC). These include:

a.    financial viability and investability of commodity projects run by the SMEs;

b.    scalability of successful GVC projects after demonstrating a successful operational model;

d.    applying the necessary mitigation measures to address social and environmental risks inherent in many of the global commodity value chains.

Commodity sector in developing countries is part of the essential global value chains, and offers a financially viable investment opportunity, while, at the same time, achieving significant development gains for the poor and vulnerable people in developing countries which frequently depend on commodities for a large part of their livelihood. [how we will do that, geographical area] The capital raised through CIIF will be deployed to projects meeting the criteria of capital preservation and significant measurable development impact driven by equitable distribution of added value generated in commodity value chains.

The Facility will focus on commodities which can be expected to, or currently make a significant contribution to the livelihoods of the vulnerable people in commodity value chains, with a measurable impact in terms of sustainable development goals. Examples of such high-impact commodity sectors include coffee, cocoa, maize, dairy, tropical fruits and nuts, fertilizer, leather etc.

The CFC takes advantage of its experience financing impact investing projects in commodities since 2014, achieving a net zero rate of risk adjusted return. The CIIF is designed as a facility to enable investment by a broad circle of impact investors into projects originated, developed, executed and managed by the CFC in the commodity sector in developing countries. 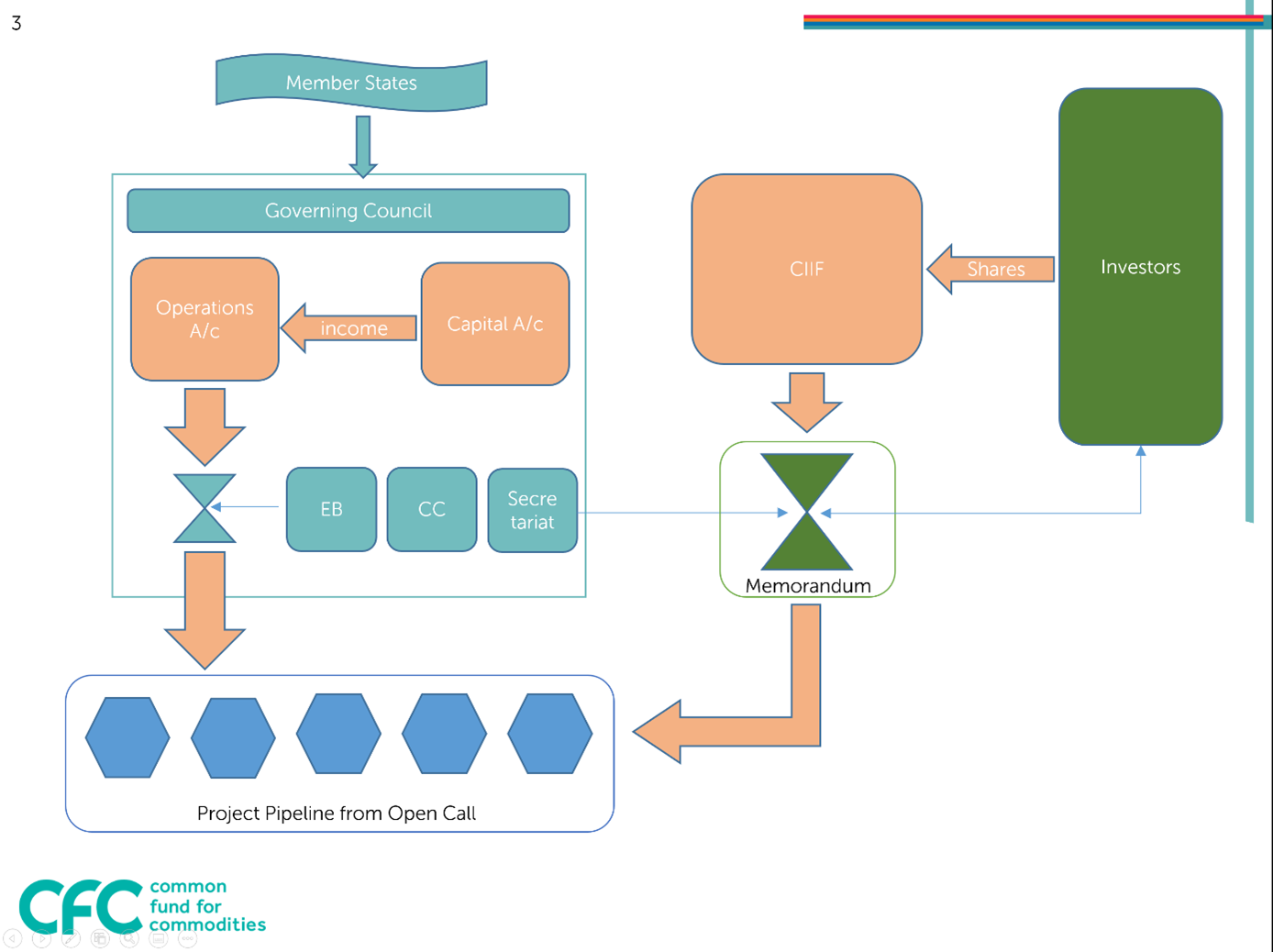 As a fund manager, currently undertaking direct investments in commodity sector in developing countries, the CFC expects CIIF to achieve significant synergies and economies by operating on the same project management infrastructure as had been built for CFC’s in-house portfolio. The CFC aims to invest up to USD20mln of its own assets in CIIF.

In December 2021, the Governing Council of the Common Fund for Commodities unanimously decided that the CFC shall proceed to establish the Commodity Impact Investment Facility (CIIF) as a new instrument to attract impact investors to finance the projects identified and managed by the CFC. The CFC will participate in CIIF with up to USD 20 million of its own investments and will arrange for the necessary management and administrative services to enable CIIF operations in complementarity with the core activities of the CFC.

The CFC expects that with the formulation of the CIIF, impact investors, both public and private sectors alike, will be able to participate to create bigger impacts globally. The Facility will focus on commodities which can be expected to, or currently make a significant contribution to the livelihoods of the vulnerable people, like smallholders and SMES, in commodity value chains, with a measurable impact in terms of sustainable development goals. Examples of such high-impact commodity sectors include coffee, cocoa, maize, dairy, tropical fruits and nuts, fertilizer, leather etc. where poverty remained entrapped in the commodity dependent developing countries (CDDCs).

The distinct advantage of CFC in managing a fund like this is its track record of last 32 years where CFC implemented projects that many of its peers find too risky to fund. Given the CFC’s culture of rigorous due diligence and highly participatory grassroot engagements and broader network of partnerships, CFC always worked to make the value chain shorter, greener and traceable so that more income and benefits could be imparted to the livelihood of smallholders and SMEs. The ultimate goal is to provide sustainable income and other welfare gains so that the beneficiaries could lift themselves up from the pit of poverty. Defying all odds, the CFC has always remained singularly focused towards stallholders and SMEs in the developing world to alleviate poverty.

This investment strategy has been developed over the years through a process of learning by doing, so that higher impacts could be created while preserving CFC’s capital as best as possible. In order to serve the smallholders and SMEs, who are otherwise a financially deprived segment of the community, CFC always tries to keep its ticket size smaller, which is prohibitively expensive otherwise. Nonetheless, CFC has always been working under a working condition where demand for CFC’s services are always on the rise. Now with the onslaught of COVID-19 pandemic, the demand for CFC services reached a height not anticipated before.

The business model of CFC’s investment always involves strategy of repeat business and culture of building long term trust with the investees. Relationship will typically start with shorter term trade or working capital financing, extending to longer term once track record and experience have been established. One of the major success factors is our strategy in building relationship with entrepreneurs in challenging conditions. CIIF will follow its risk mitigation strategy and will offer short term working capital financing, trade financing to new investees.  Investees with a track record can further be considered for longer tenor financing, such as capex.

Since 2014, the CFC invested its capital and established such trust with a number of investees who may now be ready for larger ticket sizes. Due to its internal regulations, the CFC will not take up these opportunities but will open them up to outside impact investors by means of CIIF. Furthermore, the origination process at the CFC has been duly updated and can generate significant numbers of new qualifying deals. Since 2014, the CFC aimed at and achieved a net zero rate of risk adjusted return.

Given CFC’s mission of alleviation of poverty by strengthening the income-generating capacity of commodity producers and mitigating vulnerability to their economic wellbeing, it can invest in projects at any stage in the commodity value chain. Historically, almost half of qualifying projects focus on processing of commodities, with the remaining projects distributed evenly between primary production, market access and financial services.

With CIIF, the CFC is poised to scale up its innovative value chain based approach of adding value to what is being exported from developing countries. It goes without saying that one of the main reasons for developing world’s slow economic growth is that its producers have failed to add value to products before exporting. Whenever CDDCs export processed goods, they create jobs for the youth and women while adding value to local economies as opposed to spending it abroad. If the problem of commodity dependency to be addressed, the developing countries ought to figure out how to add value to what they produce. This is where CIIF and CFC converge to steer ahead the mission of sustainability to ease the trap of commodity dependency in the developing world.

Documents of the Working Group (members only)

Project portfolio of the CFC

Neither the Common Fund for Commodities nor any of its Member Countries, nor associated companies make any representation or warranty as to the accuracy or completeness of the information contained in the CIIF Placement Documents and nothing contained in the Placement Documents is, or should be relied upon as a promise or forecast as to the future. Any prospective investor should rely solely on its own due diligence, judgement and business analysis in evaluating subscription to Participations in CIIF.