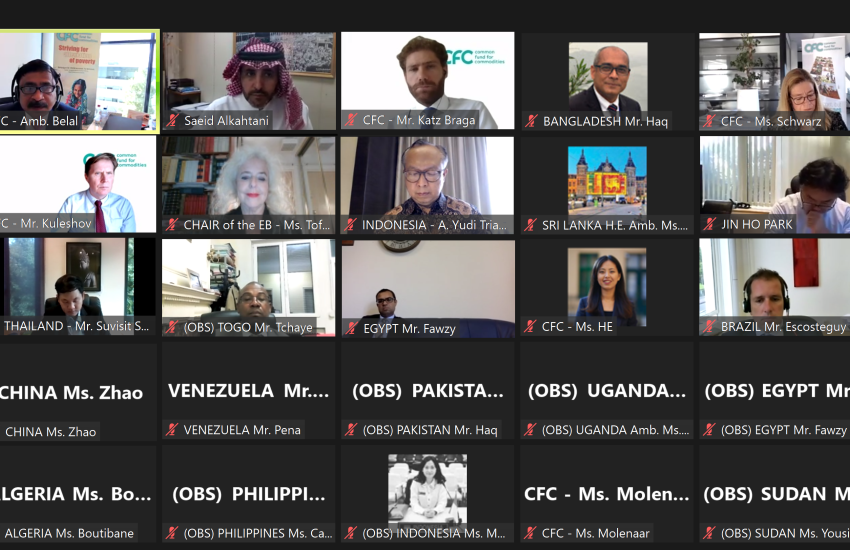 On 7 October 2021, the Common Fund for Commodities (CFC) held its 72nd Meeting of the Executive Board (EB) by teleconference. The EB reviewed five project proposals submitted through the Open Call and recommended by the Consultative Committee. Upon thorough consideration, the EB approved all projects to receive CFC finance. The total value of projects approved equals USD 45,9 million, of which USD 6,9 million of CFC financial contribution. These projects are based in Indonesia, Kenya, Malawi (LDC), Mali (LDC), Rwanda (LDC), Tanzania (LDC), Uganda (LDC), Zambia (LDC), among others. Not only they cover commodities like fruits, coffee, vanilla, but also include companies striving for global food security, waste reduction, climate change mitigation etc.

In his opening remarks, Ambassador Sheikh Mohammed Belal, Managing Director of the CFC, stated that the CFC was able to make the highest disbursement amount of USD 8.5 million during the last five years, defying this lockdown, while making significant efforts for savings in its administrative costs. This is also the year where the CFC has been able to make the highest number of project approvals in the last ten years. Amb. Belal also elaborated on the measures that the CFC will implement from 2022 onwards, which revolve around making commodity value chains not only more productive and climate friendly, but also as transparent and gender balanced as possible.

Ambassador Belal also reported on how the CFC was very focused to address the exigencies of COVID-19 amongst our beneficiaries. As per provision of the Emergency Liquidity Facility (ELF), the CFC tried its best to make its resources available to the beneficiaries. At the same time, the CFC also brought in other new innovative interventions like trade finance, and was happy to see that the venture into trade finance was found to be quite promising.

The pre-EB meeting was held on 6 October to discuss the projects in detail and address any potential comments/queries  from Member States. This was also an opportunity to present a project supported by the CFC, namely, Mercon Coffee Group – a coffee trading company headquartered in the Netherlands and operating in Brazil, Guatemala, Nicaragua, and Honduras. Another project was presented on the day of the EB meeting: Natural Extract Industries Ltd., a natural vanilla flavor manufacturer from Tanzania. These presentations demonstrated the impact that projects can achieve with CFC support, and may inspire future projects to reverse biodiversity loss, inspire climate friendliness and resilience in the value chain.

Striving to make commodity value chains robust and sustainable, the CFC has always focused on smallholders and SMEs in commodity-dependent developing countries. The key to success is thus to take a value-chain approach: from the market, back upstream to ground zero at the producers level. If smallholders can be competitive using innovation and other forms of additionality, there is large, unlocked potential to improve food and nutrition security. Accordingly, the EB discussed the application of Additionality, Partnership, and Innovation (API) Policy to enhance project selection and assessment. It is worth mentioning that the criteria will complement those already in place, therefore allowing for a more comprehensive assessment at the project selection stage.

Further, the EB discussed the progress of the Working Group on Sustainable Fund Management (WG-SFM) for the establishment of the Commodity Impact Investment Facility (CIIF). Proposed by the EB during its 68th meeting in 2019, the WG-SFM had its first meeting in September 2020 and concluded its deliberations in September 2021. After the WG’s recommendations on the way forward of the CIIF, the EB endorsed the document. The CIIF will be an impact investment fund, established and advised by the CFC as a public-private partnership to invest in commodity value chains in developing countries. The purpose is to advance the sustainable development goals while achieving capital preservation or positive rates of return on its portfolio. With the EB’s endorsement, the CIIF will now be placed before the Governing Council for their consideration and approval in December 2021.

In light of its partnership with the Council on Smallholder Agricultural Finance (CSAF), the CFC Secretariat presented to the EB a Memorandum of Understanding (MoU) to strengthen this cooperation on coordinated measures as to restructuring of loans. The MoU would ask for information exchange and closer cooperation between the lenders, and looks for more standardized procedures to deal with situations of financial distress.

The CFC Secretariat also presented an MoU between the Dutch-Bangla Chamber of Commerce and Industry (DBCCI) and the CFC. As it aims to get involved in more development activities, the DBCCI is seeking a partnership with the CFC to advance both organizations’ mandate and objectives in achieving the SDGs. To do so, the MoU introduces a formal framework for the future cooperation between the CFC and the DBCCI.

Other items discussed during the EB Meeting include the Guidance on Adjustment in the amount of Fast Track Projects from USD 120,000 to USD 300,000; the Operational Programme of the CFC for 2022; the Impact Portfolio Management; the Designation and Re-designation of International Commodity Bodies; the Draft Administrative Budget 2022; the 2020 Audited Financial Statements (First Account, Second Account, Provident Fund); and the Appointment of Auditors. Another proposal on making SDG-13, “climate action” as core SDG was postponed till the next EB as desired by a member state seeking more details about the implementation of the said proposal.

The 72nd Meeting of the EB can be considered an important achievement given the collaborative efforts from all members in order to strengthen resilience and improving productivity using our accelerators like API, impact data and continuous oversight in a post-pandemic world. We trust that with the activation of the CIIF, subject to approval of the Governing Council, the CFC will be in for an exciting phase to scale up its significant “impact” experience for last 32 years.

The CFC aims for a resilient value chain with innovations and creativity where global community, as one humanity, would be able to work together to collaborate more fairly, sustainably and inclusively from farm to fork and beyond.

Note to the editor: The Common Fund for Commodities (CFC) is an international financial institution established under the framework of the United Nations. The CFC provides financing for projects in commodity dependent developing countries to address challenges they face in the commodity value chains. CFC also endeavours to work as a conduit for transfer of technologies and innovations from developed to developing world.