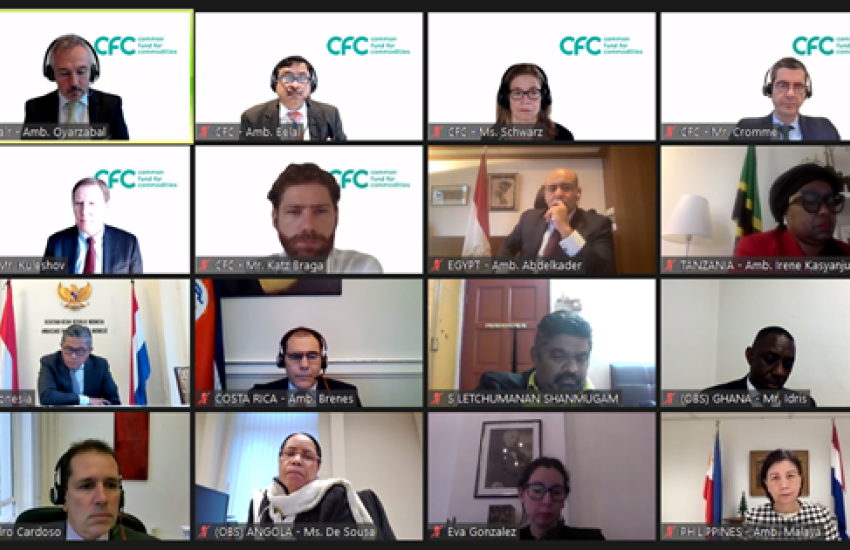 33rd meeting of the Governing Council

The Thirty-Third Annual Meeting of the Governing Council (GC) was virtually held on 14 and 15 December 2021. The meeting was well attended by Governors; Alternate Governors; and representatives from international organizations, including the Food and Agriculture Organization of the United Nations (FAO) and the International Rubber Study Group (IRSG).

One of the high points of this year’s GC is the consensus approval of the GC for the establishment of the Commodity Impact Investment Facility (CIIF) as a new instrument to attract impact investors for the financing of projects identified and managed by the CFC. It is worth recalling that this initiative was introduced by the Executive Board (EB) during its 68th meeting, and a Working Group on Sustainable Fund Management (WG-SFM) was thus established. After 13 monthly meetings, the WG-SFM presented a Private Placement Memorandum, which was endorsed by the EB in its 72nd meeting, and eventually approved by the GC during this meeting.

The CIIF is an impact investment fund, established and advised by the CFC as a public-private partnership to invest in commodity value chains in developing countries. It is hoped that at this pandemic wrecked developing world, funds like the CIIF have the potential not only to scale up the good work of CFC for the last 32 years, but it may also make the finance faster and even cheaper. The CIIF will benefit from the CFC’s experience and expertise with funds from impact investors to address the fundamental issues of the financing gap among smallholders and SMEs across almost all commodity value chains in the developing world. Managing Director Ambassador Belal, while expressing his gratitude to the Council for their consensus approval of this Fund, stated that with this approval is no longer a pipe dream and as such urged all Member States to give their support as anchor investors and provide additional resources in the form of voluntary contributions.

The Council also took note of the fact that this year, despite the COVID-19 pandemic-related lockdown and other challenges, the CFC indeed made the highest disbursement amount since its reform in 2012. Also, in 2021 the CFC approved financing of eleven projects with an outlay of USD 114.3 million where the CFC’s contribution stood at USD 18.9 million. Overall, these projects combined are expected to reach 228,165 smallholder farmers, helping them to have better access to markets and increase their productivity levels. The projects not only cover commodities like fruits, coffee, vanilla, but also include companies striving for global food security, waste reduction, climate change mitigation, and resisting loss of biodiversity. The issue of gender empowerment has been a constant theme across almost all investments under considerations. The targeted SDGs were SDG 1 (No poverty), SDG 2 (Zero hunger), SDG 5 (Gender equality), SDG 8 (Decent work and economic growth), SDG 9 (Industry, innovation, and infrastructure), SDG 10 (Reduced inequalities), SDG 12 (Responsible consumption and production), SDG 13 (Climate action). A detail report on the outcome of the impacts has also been presented to the Council.

The meeting was chaired by H.E. Mr. Mario Oyarzábal, Ambassador of the Argentine Republic in the Netherlands. In his opening remarks, Amb. Oyarzábal expressed his optimism despite the continuous challenges posed by the pandemic. The CFC indeed has managed to keep operations going and quickly unlocked measures to support SMEs struck by the effects of the pandemic. Amb. Oyarzábal highlighted that the development community must ensure that the recovery improves the structure of value chains permanently, so that the crisis can also become an opportunity. Considering the significant challenges to address and the growth of impact investing in contributing to the SDGs, the CFC’s CIIF was addressed as holding an important role. The CIIF could indeed uncover new projects and opportunities to invest in Commodity Dependent Developing Countries (CDDCs) through commodity value chains.

The only keynote address of the Council was delivered by Ms. Rebeca Grynspan, Secretary-General of the United Nations Conference for Trade and Development (UNCTAD) through a pre-recorded statement. As the CFC was created under the auspices of UNCTAD in 1989, this participation brings to the fore the shared history and guiding principles of the two institutions. While elaborating on the challenges that CDDCs face during the COVID-19 pandemic, Ms. Grynspan emphasized the need to support these countries in their recovery. Another high priority policy area for CDDCs is climate adaptation and mitigation, for which all stakeholders much collaborate with the relevant partners to develop an appropriate response. Ms. Grynspan further shared three areas of action for a common agenda: diversification and value addition, technology transfer and innovation, and inequality reduction. In this regard, she congratulated the CFC for their innovative idea of the CIIF and its proactivity in bridging the finance gap in CDDCs. As such, UNCTAD and the CFC, together with other partners, will join forces with CDDCs and support them to reduce commodity dependence, strengthen resilience, and achieve the Sustainable Development Goals (SDGs).

In his statement, Ambassador Sheikh Mohammed Belal, Managing Director of the CFC, elaborated on the inequalities that keep affecting vulnerable countries, and how the CFC has sustained efforts to support them. Amb. Belal stressed the need to align our efforts with the SDGs and the goals set at the COP 26.

Furthermore, Amb. Belal highlighted some important measures implemented this year: the Anti-Bribery and Corruption Policy (ABC Policy), and the Independent Complaints Mechanism, and the Additionality, Partnership, and Innovation (API) Policy. In this regard, the CFC has consolidated its partnerships with the Council on Smallholder Agricultural Finance (CSAF), has become involved with the Dutch-Bangla Chamber of Commerce and Industry (DBCCI), and has partnered with the CASA Technical Assistance Facility.

As the Fifth United Nations Conference on the Least Developed Countries (LDC5) in Doha is approaching, Amb. Belal shared the CFC’s side event with UNCTAD, titled “Productive capacities and impact investing with a focus on nutraceuticals and fisheries in LDCs”. The Managing Director invited all members of the Council who may be in Doha for LDC5 to join this side event as he urged them to work together to make a difference as an agent of impact and change.

During the pre-GC meeting, Colcocoa, a CFC project was presented by its founder to demonstrate the evolution of the business and its impact on the ground. Established in 2012, Colcocoa is a Colombian coffee trader that supplies UTZ-certified and fully traceable cocoa beans to a global confectionary producer. It sources cacao beans from around 1 thousand farmers from eight cooperatives and operates in an agroforestry cocoa plantation covering 130 hectares, whilst 130 other hectares are used for conservation, promoting biodiversity preservation. With a CFC trade finance loan, the company will manage to source cacao beans from more smallholder farmers, to improve yields, and to manage longer cycles and affront inherent disruptions in supply chains without exiting the market.

A presentation was also given by the Chief Executive Officer (CEO) of The Moringa Fund, an investment fund targeting agroforestry projects in Latin America and Sub-Saharan Africa. Throughout ten years of experience, Moringa has impacted 12,000 farmers and sustainably managed 15,000 ha of land. The CFC has been partnering with Moringa as both donor and Technical Assistance Facility manager and is proud of the outcomes of that these joint efforts.

The CFC Secretariat also presented a Memorandum of Understanding (MoU) between the Dutch-Bangla Chamber of Commerce and Industry (DBCCI) and the CFC. Seeking more involvement in development activities, the DBCCI wishes to partner with the CFC to advance both organizations’ mandate and objectives in achieving the SDGs. The GC thus considered and approved this MoU and authorized the Managing Director to sign on behalf of the CFC.

Another MoU was presented to the GC to strengthen the CFC’s cooperation with the Council on Smallholder Agricultural Finance (CSAF) on coordinated measures as to restructuring of loans. This would allow for information exchange and closer cooperation between the lenders and looks for more standardized procedures to deal with situations of financial distress. Upon consideration of the MoU, the GC approved it.

The GC also discussed relevant operations and financial matters of the CFC, such as the administrative budget for 2022, the 2020 audited financial statements, the decisions taken by the EB during 2021, among others.

Finally, the GC re-elected by consensus Amb. Oyarzábal as Chairperson of the GC for the period up to and including the Thirty-Fourth annual Meeting of the GC. A good number of member states made their national statements urging for investments to address the problems of commodity dependence with innovations and creativity as they praised the CFC’s passionate drive to alleviate poverty globally.

The CFC thanks all its member states and partners for their participation and commitment to the CFC’s mission of poverty alleviation. This GC meeting showed, once again, that innovations and collaborations are key levers to resilient and transparent value chains, and to support the CDDCs in their post-pandemic recovery. We still have about 8 years to achieve the SDGs, and whilst it might seem far ahead, concrete and coordinated action is required now more than ever to create long-term impact. The CFC therefore encourages peers to seize opportunities and join this shared journey of sustainability in a post-pandemic world.

Note to the editor: The Common Fund for Commodities (CFC) is an international financial institution established under the framework of the United Nations. The CFC provides financing for projects in commodity dependent developing countries to address challenges they face in the commodity value chains.