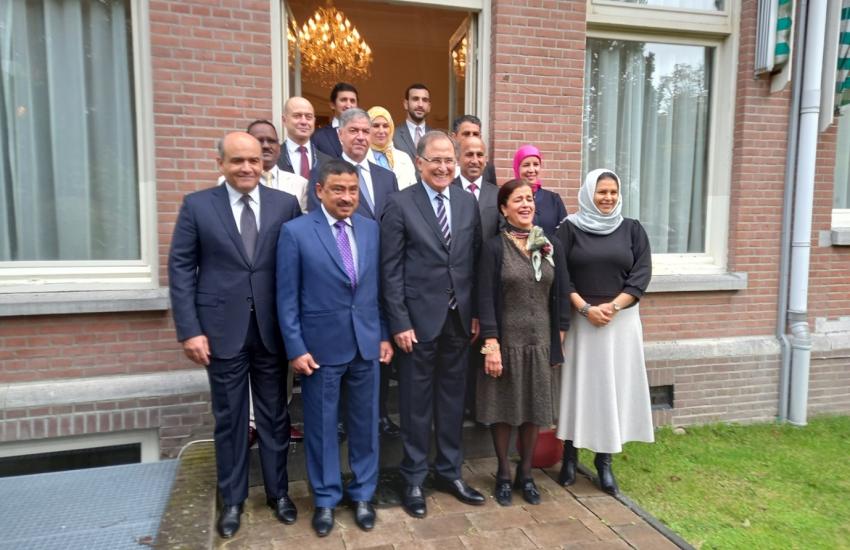 Ambassador Sheikh Mohammed Belal is seen with the Ambassadors and Head of Missions (HOM) of the embassies of Arab countries in the Netherlands. At the kind initiative of H.E. Mr. Abdelouahab Bellouki, Ambassador of Morocco and Dean of the Arab Ambassadors, the meeting was hosted by H.E. Mrs. Rawan Sulaiman, Ambassador of the State of Palestine.

The initiative was taken by the Arab countries, for the first time, to know more about the activities of the CFC and its impact on the ground. Ambassador Belal briefed the Ambassadors and other HOMs about the past, present, and future planning of the CFC as he sought their support to continue the CFC’s core mission of poverty alleviation through productivity gains and income for the smallholder farmers and SMEs (Small and Medium Enterprises).

After a brief introduction by Ambassador Bellouki of Morocco, Ambassador Belal briefed the participants on the current as well as probable future initiatives of the CFC. Amb. Belal urged all to pay special attention to extreme poverty globally as this pandemic, once again, sadly proved that we all are linked with our health and wellbeing irrespective of our geographic locations. “What extreme poverty really means is that no matter how hard you work, you’re trapped. You can’t get out unless helping hands are stretched out.” Ambassador Belal noted as he urged all to take care of those whom we left behind.

Paying tributes to those countries in the Arab region who are a commodity success story, Amb. Belal also requested the distinguished participants to share their success stories. CFC MD also requested them to introduce CFC to potential stakeholders so that CFC could scale up its work globally. Ambassador Belal wished to see more working relations and partnerships with the countries in the days to come.

Ambassador Belal also briefed the forum on the ongoing initiative on the formulation of a fund titled CIIF (Commodity Impact Investment Facility) and thereby enabling CFC to contribute more to poverty alleviation. Once formed, the CIIF could also be an avenue for Arab countries to join this impact investment fund as an anchor investor as well as to introduce Islamic Finance in Europe through their participation in the said CIIF fund, when formed.

By taking the floor, Ambassadors of Egypt, Iraq, Lebanon, Jordan and CDAai of Kuwait thanked Ambassador Belal and appreciated the CFC’s activities worldwide to alleviate poverty.

Ambassador of Morocco, who Chaired the event as Dean of the group, thanked Ambassador Belal for his informative briefing and assured to remain engaged so that more projects from the Arab region could be considered in the future. He also urged those members of the Arab group who are yet to be members of CFC, to consider so without any further delay.

For a better presence of the CFC in the Arab region, Ambassador of Egypt suggested translating the CFC’s Call for proposals into Arabic. Before taking leave, Ambassadors and other participants assured that they will do their best to bring good project ideas from their respective countries and the region, and to promote the idea of impact investing as best as they could.

Ambassador Belal urged them to disseminate the CFC’s Call for Proposals so that more quality projects from the Arab region could be considered in the future. He sought their help to keep this “bottom-up” approach functional with heightened exchanges among potential applicants and the CFC.

Ambassador Belal assured to pursue more innovative outreaches in the days to come to make the services of the CFC available to as many people as possible in the commodity-dependent developing world, with a heightened sense of innovations and creativity.